Water is a precious resource in the Sahel. 2005 Photo by Bikem Ekberzade

Oure Cassoni, BAHAI (Eastern CHAD) — Hatice Davud Cabbar (Akaba, Zagawa) is from Ambouru, Darfur. She is 40 years old. She crossed into Chad 12 days ago. They traveled for 5 days from Ambouru with 5 people, her 4 sons, 1 grandson with her sisters on donkey back. Prior to their crossing they took refuge in the mountains. Ambouru was burnt and the city was surrounded and taken over by the Jenjaweet. From where they took refuge, they only knew that the militia was in the city however they couldn’t see what was going on in there. They ate Mati (seeds) on the way. Sometimes she pressed the seeds for her children to eat and from other people who had animals she took milk. The group dug wells for water. They wanted to cross into Chad for a long time but they were afraid of the military between here and Sudan. June 8, 2005. Photo by Bikem Ekberzade. 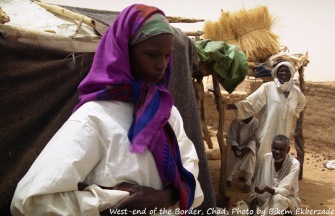 Oure Cassoni, CHAD — Baraka Titi is the grandfather of the children. He is from Farawi town (Darfur) Darma village, 20 kms away from town. The family is Zagawa and Muslim. His grandchildren, Atima (seen here) is 10 years old, Asira is 12 (the girl). They are a total of 5 siblings, 2 of which are taken by the grandfather (father’s father). The other 3 are taken by grandfather (father of the children’s mother) Children’s father was killed by the Jenjaweet in 2003 while fighting over the animals. Their mother died 11 months ago before the construction of the camp while giving birth. Her sister (Ayse Baraka, a blind woman) took the baby. June 8, 2005. Photo by Bikem Ekberzade. 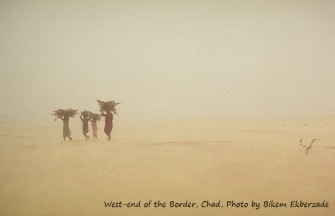 Oure Cassoni, Bahai, CHAD — Despite the sandstorm refugee children from Darfur collect stray wood for cooking outside the camp grounds, in the desert. June 8, 2005. Photo by Bikem Ekberzade. 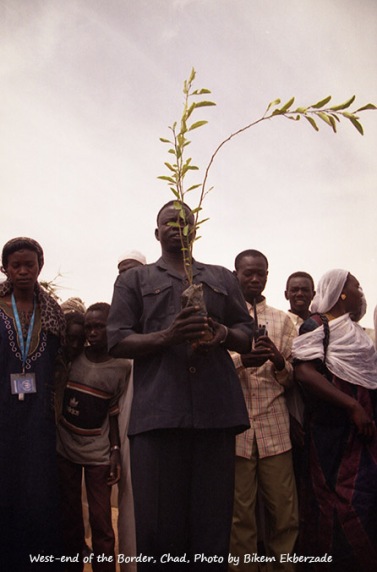 The small selection of photographs you see here are from West-end of the Border my second book, and is available online, free access via http://www.thevirtualstory.com/weob